Keep Me Out of Your Boxes

I recently shared an article on Facebook that said something positive about the President’s religious faith and practice. As you can imagine, it was like kicking a hornet’s nest in an abandoned barn. Getting folks stirred up is not a problem for me; I don’t mind a lively discussion, as long as everyone is civil.

When I shared the article I expected a few comments. I have a bunch of good Facebook friends who are not afraid to speak up. However, I must admit, I was caught off guard with the response. The second comment took the conversation in a totally unexpected direction.

The article I shared was a description of the President’s activities and comments about Easter. Immediately, a pastor who is a Facebook friend essentially said he did not believe the President was a Christian because of his belief about gay marriage. I can live with someone making that statement in today’s political/theological climate. It seems that gay marriage has become the default discussion for every conversation.

However, he kept insisting that I declare my position on gay marriage. He wouldn’t give it a rest, even calling out others who commented during the discussion. For some reason, it was extremely important to this man that we all declare our stance on the issue of gay marriage.

I understand that some have a need to put everyone neatly in a box. It makes their life simpler. “I can relate comfortably with those in this box, but I need to be careful around those in this other box, and I must stay away completely from those in that box over there.”

Several years ago I was trying to build a consulting business, helping churches and individuals arrange their lives around good stewardship principles. A friend in another state was trying to expand his similar business to Texas, and it appeared that by working together we would both benefit greatly.   END_OF_DOCUMENT_TOKEN_TO_BE_REPLACED

I watched the President’s speech yesterday at the 50 year commemoration ceremony in Selma, Alabama. It was a very good speech, one of the best I have ever heard from a politician, bordering on being a Christian sermon. In fact, after it was over, I mentioned to Sharon that it felt like we had just been to church.

After hearing him speak yesterday, and recalling many of his other speeches, it is fascinating how he so effortlessly weaves the words of scripture and Christian hymns into many of his speeches. It is not unusual for many of our Presidents to quote scripture in their speeches; however this President seems to do it with great familiarity of the words. 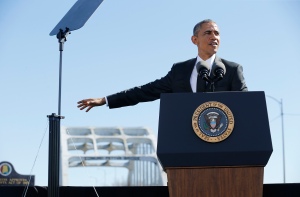 What has always perplexed me is the way so many people insist that President Obama is not a Christian. He claims to be a Christian, he shares his faith often, he testifies to a conversion experience, he appears to live a lifestyle that is consistent with a Christian faith, and as I said, he seems very comfortable with the Bible. These are all evidence of a genuine faith.

I understand that some of you will suggest I read James 1:19 where we are reminded that even Satan himself believed in God, or you might refer to the temptations of Jesus in the wilderness and remind me that Satan also quoted scripture. But come one, if that is your criteria then none of our claims to be Christian are valid. END_OF_DOCUMENT_TOKEN_TO_BE_REPLACED