We should strive to understand the world with the newspaper in one hand and the Bible in the other. These words have been around a long time, at least as far back as my seminary days, and they are not credited to some right-wing Christian politician. It is commonly taught the idea first belonged to Karl Barth, a German theologian. Although the words might have been spoken in the first half of the last century, they have never been more true than they are today.

When I clicked on the website of the local newspaper this morning this was the bold headline that struck my attention – “Baptist free-for-all: Cruz over Huckabee.” Of course I read the story. It seems that a Metroplex mega church held a presidential wanna-be forum last night with six Republican candidates in attendance. More than 6,000 gathered to listen to these politicians proclaim their faith, portray their platform, cast aspersions on their opponents, and plead for votes. It sounds like it was two hours of listening to half-a-dozen men, and one woman, talk about how they are better than anyone else. 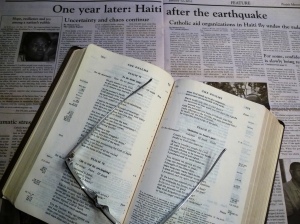 Although this event occurred relatively close (at least by Texas’ standards) to our little band of believers known as Bread Fellowship, the two meetings could not have been any more dissimilar. We did not have thousands of people meeting in an enormous auditorium. Instead, we were barely more than a dozen sitting in a circle of stackable chairs in a rented art/dance studio.

The conversation at Bread Fellowship was also about greatness and what it looks like and how it can be achieved. As we are working our way through the lectionary for the year, the passage for the day was Mark 10:35-45. In that passage, Jesus reminded his disciples that the pathway to greatness is through servanthood. After reading the newspaper headline, it is amazing how appropriate Jesus’ words were for this particular day.

Three times in the Gospels, Jesus told His disciples that He would be crucified, buried, and then rise from the dead. After each occurrence, the disciples essentially said, “Yeh, we get that. But afterwards, after you are in charge, can we have the seats of honor next to you?” They hurriedly moved past the rejection and death part, and went straight to the reigning in glory. In doing so, they were in danger of completely missing the reigning in glory part altogether.

Jesus taught the glory that awaits us is only available through the path of servanthood. If we want to be great then we must serve others. If we want to be really great then we must become a slave to everyone. It’s not an easy message, but actually the word often translated “servant” is more properly rendered “slave.” Being a slave is a much lower position than a servant. Jesus is greatest in God’s kingdom because He voluntarily poured out His life in service to others.

We also noticed at Bread Fellowship on Sunday that Jesus identified John the Baptist as the greatest of all men (see Mark 11:11). Remember, John is the one who said he was not even worthy to untie Jesus’ shoes (see Luke 3:16). I don’t think John would have been a speaker at the candidate forum Sunday night.

That brings me to the point of this whole thing. What happened last Sunday concerns me in several ways. First, and I won’t even take the time to expand this observation, how come we don’t have a problem with a church being so blatantly involved in the political process?

Second, and I will expand this observation a smidgen, those who are willing to use the church in their quest for greatness are going about it all wrong. The church, at least when it is following Jesus, does not have greatness to offer. All the church has is the message of Jesus, which is all about servanthood.

Greatness is not a product of preening, posing, primping, postulating, and pontificating. Greatness is about serving, even to the point, as Jesus demonstrated, of laying down your life for the good of another.

If the six political candidates were interested in true greatness they would have left the mega church and driven across the Metroplex and sat with our modest little congregation where we heard the words of Jesus. But, to be honest, it doesn’t surprise me they didn’t because they really don’t want greatness – they want votes, and we don’t have many.

My third concern is the disappointment I have with my brothers and sisters in Christ and their willingness to participate in the politicians’ quest for greatness. They should know better. They have the benefit of the entire Gospel accounts, yet they still clamor for the power and promise of the world. They want to support and elect the candidate who will give them the most – the most power, influence, prestige, and yes, stuff. It is not surprising that a half-a-dozen politicians pander to the church, promising “I’ll scratch your back if you scratch mine.” Many Christians are striving to understand the world with the newspaper in one hand, but they have tucked the Bible away in their back pocket.

In spite of the fact that we know Jesus was great because he chose sacrifice, we find ourselves tempted to find greatness some other way. I can hear Ted, Mike, Carly, Ben, Rick, and Jeb standing side by side with James and John seeking the places of honor. Yet, calling them to Himself, Jesus still says to them, “You know that those who are recognized as rulers of the Gentiles lord it over them; and their great men exercise authority over them. But it is not this way among you, but whoever wishes to become great among you shall be your servant; and whoever wishes to be first among you shall be slave of all. For even the Son of Man did not come to be served, but to serve, and to give His life a ransom for many.” (Mark 11:43-45)

2 responses to “Newspapers and Bibles”