We Need to Demand Better

Last week the Texas Rangers played the Los Angles Angels in California. One game ended when a Ranger slid into the Angel’s shortstop trying to break up a double play. It was a hard slide, and the infielder received a small cut from the runner’s spikes. The crowd was angry, and a fight almost broke out.

The next night, that infielder who had been cut by the runner’s spikes, slid into the Ranger infielder in an attempt to break up a double play. The crowd once again came to life; not with anger this time, but with glee. The attitude among baseball fans is if your guys does it then it’s a dirty play. If our guy does it, then it’s just good hard baseball.

The same attitude prevails in politics.

One of the issues of discussion floating around social media this week was the crude, racist remark made by TV actress Roseanne. This was followed up a couple of days later by a similarly crude, hateful remark made by Samatha Bee on her TV show. Let me begin my discussion by listing what I see as similarities with the comments and then the differences. 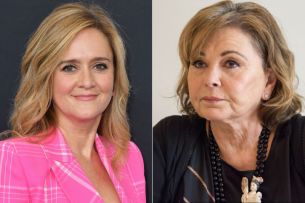 My problem is with listening to Christians on both sides of the issue supporting an individual for making crude and hateful comments. I’m reminded of Supreme Court Justice, Potter Stewart who commented about pornography, “I shall not today attempt further to define the kinds of material I understand to be embraced within that shorthand description [hard-core pornography], and perhaps I could never succeed in intelligibly doing so. But I know it when I see it, and the motion picture involved in this case is not that.”

It’s difficult to define what’s vulgar in our day and age, but I recognize that both comments by these women fall into that category. It saddens me that as Christians we feel it’s necessary to stoop down and defend such language simply because it’s used by someone who holds our political opinion and one who stands for what we believe.

If we can’t, and don’t, hold people within our own camp to higher standards, who will? If someone can say whatever they want, knowing that half the country, including many followers of Christ, will cheer them on, then we’ve lost all hope of ever having a civil discourse.

I’ve clearly said numerous times the past two years that I couldn’t and didn’t support either candidate for President because I felt neither one was qualified. It was my way of saying that we can do better if enough of us demand better.

It is just as true that public figures can do better when making political comments, but it won’t happen unless enough of us demand better.

Our politicians will not stop lying to us and lining their pockets at our expense until enough of us demand better.

As Christians, we are supposed to have a better way, but too many of us are wallowing around in the same mud as everyone else, thinking that we can say and do anything we want as long as the other side is saying and doing the same thing.

It’s ok to call out your side when they are out of line. In fact, if you ask me, the Texas Ranger who slid into the other player was wrong and what he did violated the rules. We should not cheer for that kind of playing. I understand the fans of the other team expressing their displeasure, but when they turn around and cheer their own player for doing the same thing the next day, what’s the point?

All this vitriol is not going to stop until enough of us demand better, especially from ourselves.