One of my earliest memories is sitting around a tiny wooden table, actually, a table my sister used in playing with dolls. On the Sunday evenings after our little Baptist church served the Lord’s Supper, my father, who was the pastor, brought home the leftover wafers and grape juice (we were Baptists, so we didn’t use wine). The wafers were those tasteless tiny white squares of water and paste that came in a box from the Baptist Bookstore. My sister and I didn’t pretend to mimic a religious ritual, we simply enjoyed what we considered a treat.

I’ve had a lot of experiences with the Lord’s Supper since then. My father, who was a highly influential man among Baptists in Colorado refused to recommend me to pastor a church upon graduation from seminary. One of the factors was my belief about the Lord’s Supper (the other was baptism). Consequently, I never served a church in that state.

As a pastor in the Texas panhandle, we had a young mother named Rosalinda discover Jesus and begin attending our church faithfully, sitting on the front pew every Sunday morning. In today’s climate, we would be expected to report Rosalinda to the immigration authorities, but we chose to enjoy her presence instead. Several weeks after she began attending, we celebrated the Lord’s Supper. As the platter filled with the tiny wafers was passed around the room, Rosalinda assumed we were collecting an offering. She placed her gift of a dollar bill on top of the wafers. We heard snickers as the tray containing cash and stale crackers circulated around the room. 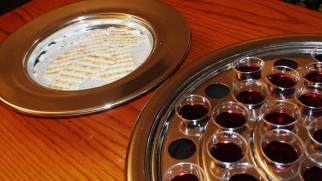 On another occasion, one of our resident legalists came to my office in the days preceding a scheduled Lord’s Supper the next Sunday and offered to sit in the back and point out who should not be allowed to participate. I’m not sure how he would do this, but I refused his offer as graciously as I could.

One of the more memorable experiences was watching my son who was sitting beside Omer Ritchie. Omer was a well-known fundamentalist pastor in his heyday, long before this event. My son Matthew was wearing a ball cap, and his arms are covered with tattoos, an unlikely duo for most churches. Omer and Matthew loved each other, and it was a touching moment to see Matthew’s large inked hand stretch out and place the loaf of bread in Omer’s frail shaking hand and say, “This is Christ’s body broken for you.”

A few minutes later, with the cup of juice moving the other way around the room, Omer said to Matthew, “This is Christ’s body shed for your sins.”

Perhaps the most unusual celebration in my experience was the use of chicken noodle soup and Gold Fish crackers. I probably should have said something about that at the time, but I didn’t.

I’ll also never forget the time when our little group was meeting in a storefront and coming to the point of the evening when we shared the Lord’s Supper. One of our congregation regulars came in late for the service. James was a lost soul living on the verge of homelessness and loneliness. A few weeks earlier he had told us that he had received bad news from a blood test and that he had the HIV virus.

My friend Charlie was leading the service, and one of Charlie’s great gifts is making everyone feel special. Wanting to do that for James, Charlie invited him to distribute the bread and the juice for us. To his credit, James said, “I’ve been out all day, give me a minute to wash up,” as he headed toward the bathroom. We waited for his return and those of us who knew his physical condition were glad that he did.

My views of the Lord’s Supper were shaped in the home of a conservative Baptist preacher, remodeled by seminary courses, refined by years of church leadership, and now completely renovated from a lifelong study of the church.

As I read the book of Acts and the beginning of the church, it seems to me that what we have come to call the Lord’s Supper (or communion, or mass, or Eucharist) was entirely unlike what we do today. The initial occurrence was in the Upper Room as Jesus and His disciples prepared for the crucifixion. The words used in today’s practice are taken from the words of Jesus on that night.

After the crucifixion, death, and resurrection of Jesus, the church gathered frequently and followed the admonition to continue the meal. It seems they did it just like Jesus did with the Twelve. It was a part of a meal, a time when they “broke bread” together. During that meal, they shared the bread and wine and reminded one another that the reason they were together was because of Jesus. It was not a stand-alone ritual to be squeezed into a church service. They took a normal daily activity and used it to remind them of what Jesus had done for them. In fact, it was probably more akin to what we do today when we say “grace” before a meal.

The question you might be asking is how do we possibly do that when the congregation consists of 3,000, or 800, or 200, or even 100? The answer is that we can’t. I’ve seen many large churches conduct a highly choreographed ritual with synchronized deacons juggling bread trays and juice glasses like a circus act. Some of them are so well organized they might do well on America’s Got Talent.

The meaning of the Lord’s Supper has been lost entirely. It was intended to be a part of a shared meal, something the early church often did when they gathered in homes. However, today’s church has become institutionalized and no longer fits around a table in anyone’s home. Consequently, since hundreds or even thousands gather for “church,” the real meaning had to be scrapped.

The Lord’s Supper is a ritual that has lost much of its import because of the way we do church. The idea of sharing a meal together has disappeared, because who shares a meal together when they are sitting shoulder to shoulder on a bench with strangers. Perhaps the closest we could come in today’s environment would be a church fellowship supper. However, even those are becoming an endangered species with our emphasis on entertainment and slick programming.

One of the best memories I have of sharing this meal with fellow believers happened on a Friday evening. It was Good Friday, and our little group gathered at a Mexican Food place near downtown Fort Worth. We put together some tables in the middle of the room, shared our meal together and shared our lives and concerns with one another. As we were winding down and plates were being cleared away, Charlie took a tortilla, broke it in half and passed it around the table with the words, “This is Christ body which was broken for you. Eat this in remembrance of Him.”

As people sat holding their little piece of tortilla, he took a cup of grape juice (although we were not Baptists and could have used wine, several of our folks were in recovery, so we chose not to use alcohol), held it up and said, “This is Christ’s blood that was shed for the remission of our sins. Do this in remembrance of Him.”

The cup was then passed around the table, and we each dipped our tortilla in the juice and passed it on to our neighbor. Remember, this is in the middle of a Mexican restaurant on a Friday night. After the cup made it around the table, we broke into a subdued version of “Amazing Grace.”

People stared. Some joined in the song. Others thought we were crazy. But it was a memorable experience. At that moment, I thought of the words of Paul: “For whenever you eat this bread and drink this cup, you proclaim the Lord’s death until he comes (1 Corinthians 11:26).

Significant changes need to take place in the way we do church before we will ever capture the full meaning of the Lord’s Supper. It will require a structure the promotes relationships with one another, something that is low on the priority list of today’s church.

For a more thorough exposition of my thoughts about church, CHECK OUT my new book, “Why I Quit Going to Church.” 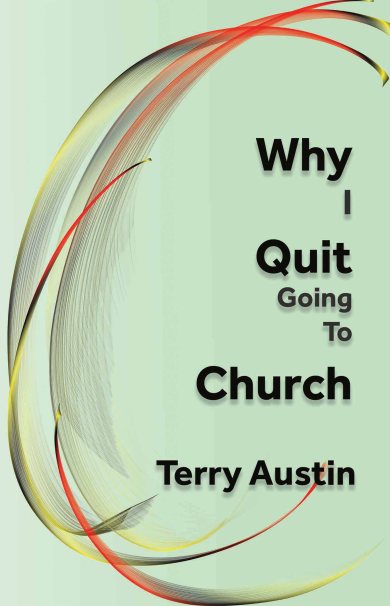